Celine's earliest memory is of being hauled, kicking and screaming, by strangers from a closet her mother had barricaded her in to keep her safe from "shadow men". A concerned neighbor in the apartment next door had called police after hearing the small girl's terrified howling and banging, leading to what would be the first of many stays in the foster care system for Celine while her mother, Linda, was treated for schizophrenia.

Her early childhood and the first few years of elementary school were regularly marked by her mother's breakdowns and the short stints in group homes that followed until Linda was, time and time again, somehow granted continued custody of her daughter. By the time she was ten years old, Celine had learned to cook, take care of herself, and generally avoid the interference of child protective services. She and Linda fell into a rocky routine where Celine played the mother and kept them both out of trouble. This let the young girl get through junior high without being bounced from foster home to foster home every couple of months.

It seemed like life would continue this way indefinitely until one day, nearing the end of her 8th grade year, she came home and Linda just wasn't there. This by itself wasn't alarming to Celine, who had gotten used to being left to her own devices for hours or even days on end, but when a full week had passed with no word from the only family she had... the teen started to worry. She held it together for as long as she could, but when her mother's case worker came for the monthly check-in, the jig was up.

Linda was later found two states over, strung out and disoriented, and this time regaining custody was out of the question. Celine began her freshman year of high school living in an overcrowded, underfunded group home. She knew the only way out was college. Her grades, which had never been particularly impressive, took a sharp upturn and all the energy she'd had to put into holding her mother together was redirected to school. The next four years passed with Celine keeping her head down, her GPA up, and the unstable Linda out of her life. With great effort, she was able to graduate valedictorian of her class and accepted into her dream school: Harvard.

Two years into her university education, things were going well for Celine. She was studying visual arts and computer science, working part-time, and had moved into her first apartment with her first serious boyfriend. Then the hallucinations started.

At first, it was just little movements in the corners of her eyes. Tricks of the light, she told herself. Then, more and more, she started seeing things head-on that just weren't there. Next were the thoughts that never felt like hers and the sleepless nights full of rampant paranoia that something horrible was going to happen. The signs were clear, but Celine remained in denial for as long as she could until her boyfriend came home from work one night to find her shredding their couch with a knife because there were "bugs hidden inside" and she could hear them skittering.

Being diagnosed with the same illness that plagued Linda was the realization of Celine's worst nightmare, but she couldn't let everything she'd worked for go up into flames that easily. With the support of her friends and boyfriend, she started the strict regimen of pills and therapy she needed to live a normal life. 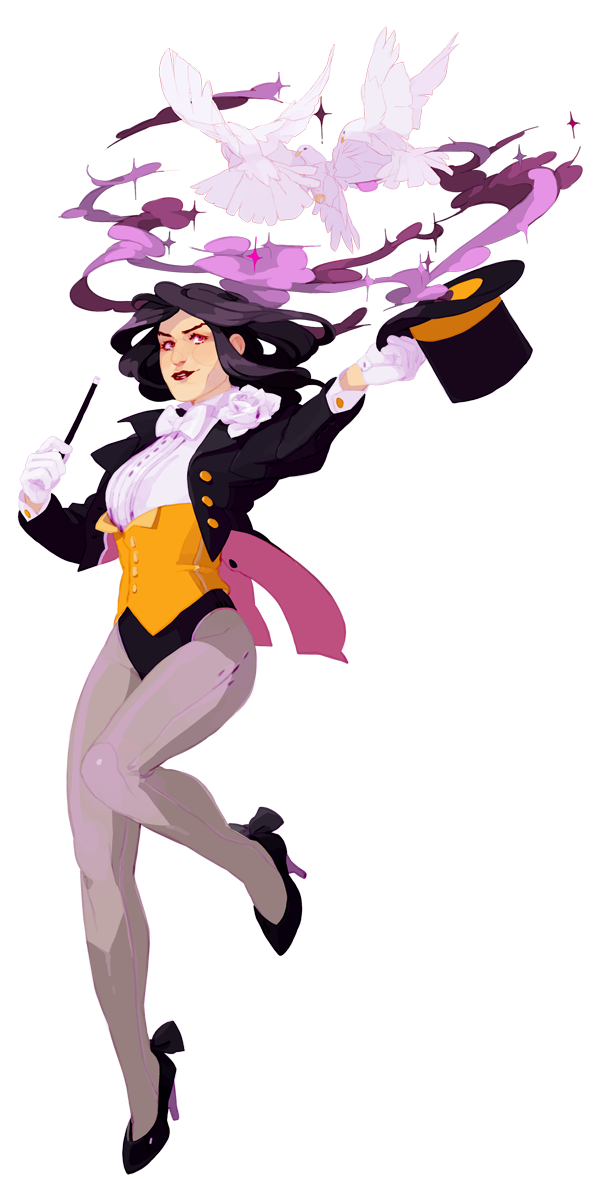 With a name like Zatanna Zatara, becoming a professional stage magician almost seems like an unquestionable career choice. Of course, it doesn’t hurt that the illusions she creates and the spells she weaves to dazzle the audience just so happen to be real.

Intelligent, confident, self-assured and able to manipulate reality itself with her vast magical abilities, Zatanna balances her time as a skilled stage illusionist with battling the dark arts alongside some of the world’s greatest super heroes. By reciting spells backwards, she can invoke anything her imagination wills, and her inventiveness often allows her to find creative solutions to even the trickiest of problems.

However, Zatanna is no stranger to the dangers of magic, having lost her father to the dark arts. Although this left her without a mentor and relatively inexperienced in the world of magic, it only furthered her resolve to stand against anyone seeking to use magic at the cost of others. [more...]